Did you know…that Iowa City hosted one of the earliest commercial airports in the country – serving as one of the strategic stops in America’s first cross-country air mail route? As a matter of fact, today, Iowa City’s airport – which opened in 1918 – is the oldest airstrip west of the Mississippi River that’s still in its original location – with many of the early pioneers of flight landing here – including Wiley Post, Jack Knight, Charles Lindbergh, and Will Rogers.

Did you also know that the very first “successful” flight in the state of Iowa occurred on October 13, 1910 in Iowa City? Captain Tom Baldwin brought his aeroplane – The Red Devil – to town for a three-day flying demonstration – an event that brought hundreds of curious spectators to the Farmer’s Fall Festival held at the Iowa City fairgrounds. Read more here.

Excitement about air travel grew exponentially following Captain Tom’s October-1910 flight over Iowa City, and it’s been suggested that – between 1910-1911 – some 46 flights were made around Iowa by 23 different aviators!

Back in Iowa City, an open plot of farm land – a cow pasture owned by W.J. Benjamin – was becoming a popular landing spot for any young soul who was brave enough to take a bi-plane up into the sky. Benjamin’s land was popular for local pilots, you see, because – unlike much of Iowa City – it was flat as a pancake, and clear of trees and obstructions. Which now brings us to…

On December 30, 1919, the U.S. Post Office Department in Washington, D.C. telegraphed Iowa City Postmaster Max Mayer to ask for information about this new airfield that had opened here in 1918. Mayer wired back…

(P-0339c) Ten days later – on January 8, 1920 – Iowa City became the only stop during the very first air mail flight between Chicago and Omaha – transporting 400 pounds of U.S. mail and a slab of beef needed for a big Omaha banquet honoring General John Pershing (above left). On the return trip, the pilot, Walter J. Smith, had the privilege of flying a live 10-pound piglet – an Iowa hog – to be served at a banquet at the Congress Hotel in Chicago! 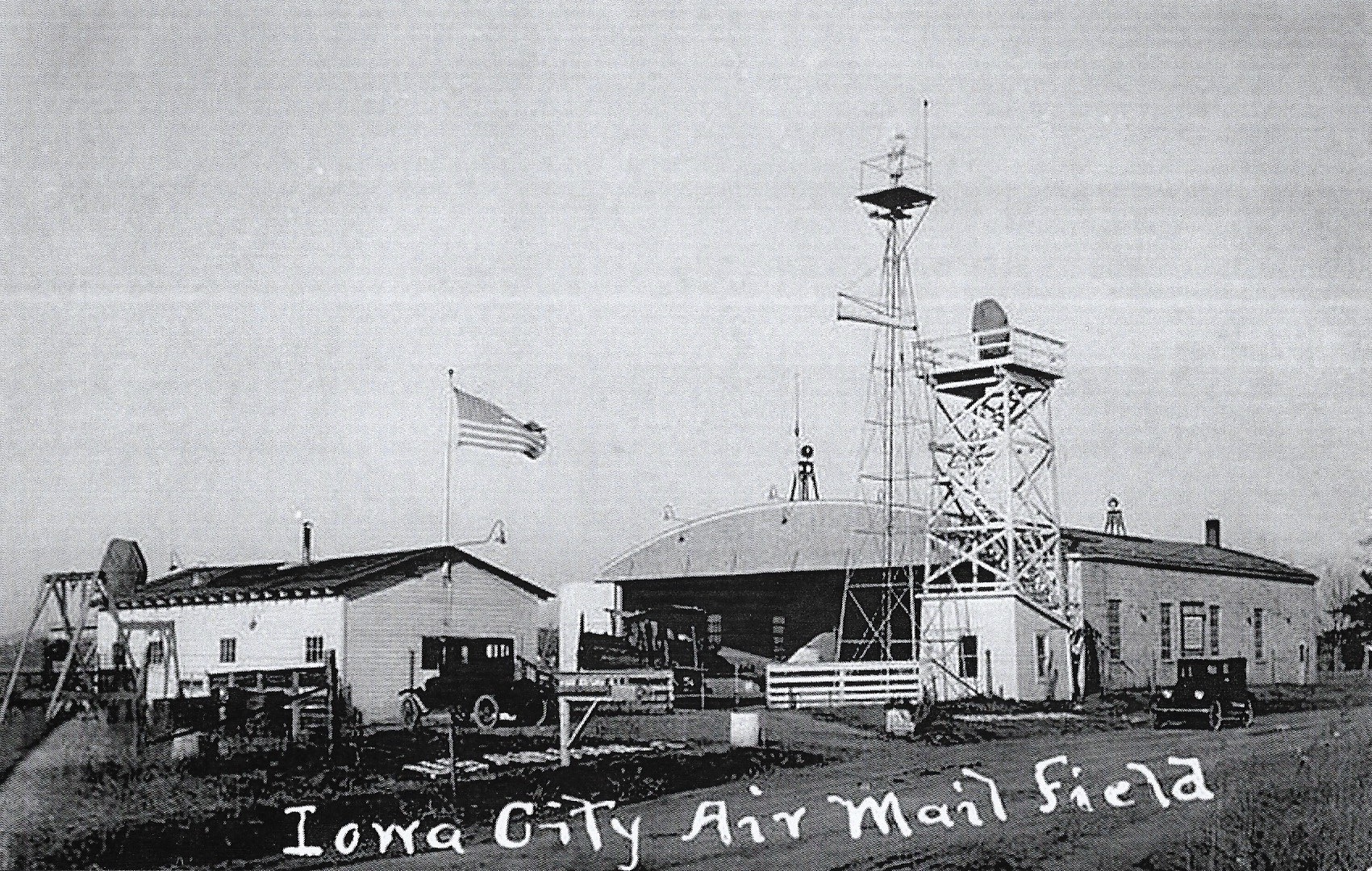 (L-0016) In May 1920, just five months after he flew that first airmail flight in and out of Iowa City, Walter J. Smith was killed in a plane wreck – an all-too-common fate for early airmail pilots. Shortly thereafter, the Iowa City Airport was renamed “Smith Field” in his honor.

The first full-transcontinental air mail flights began on September 8, 1920 – with Iowa City being the one stop for fuel between Chicago and Omaha. These flights were only attempted in daylight hours, however, and provided little advantage over the train-delivered mail. Still, the concept of delivering mail by air was proven by these early flights.

Five months later, on February 22 & 23, 1921, Smith Field – the Iowa City airport – was designated as a fuel stop on the first transcontinental day/night air mail attempt. This flight tested the feasibility of flying the mail around the clock, in all weather conditions – and very nearly ended up in disaster.

Landing at Omaha by the light of burning gasoline drums placed along the runway, Knight found that his relief pilot had not arrived. By this time, the snowfall had become a blizzard. After refueling his plane, Knight took off for Chicago at 2 a.m. with only a road map to guide him over terrain he had never crossed before. As he got closer to Iowa City, the Smith Field watchman set out railroad flares to help him land. Knight quickly refueled and took off again, heading toward Lake Michigan, which would serve as a “landmark” for him to find Chicago. When the snow stopped, he encountered fog. Finally, with daybreak, the fog burned off and Lake Michigan was sighted. When Knight landed at Chicago’s Checkerboard Field he was greeted by a throng of people who had gathered to see if the daring young pilot would finish his remarkable flight. His mail was relayed onto Cleveland and then New York, finally arriving 33 hours and 20 minutes after leaving San Francisco.

Jack Knight was a national hero. He saved the first continuous coast-to-coast airmail flight from certain failure! Having covered 830 miles in nine hours, Knight proved that the airmail could move, even in darkness and bad weather. Although he downplayed his role, he did concede once…

If you ever want to worry your head – just try to find Iowa City on a dark night with a good snow and fog hanging around.

(L-0075) National Geographic Magazine – January 1926 – offered a 61-page article on these ‘day & night’ mail flights – including numerous pictures taken at the Iowa City airport – one of the primary stops on these intercontinental airmail flights. At this time, scheduled airmail service between New York and San Francisco regularly required only 34 hours!

As air travel became safer and more contractors were entering into the competition – Ford Motors was the first private contractor – the Postal Service announced a new rate system, with a one-ounce letter – traveling less than 1,000 miles – costing the customer only 10 cents!

First of all, it was the first day when Boeing Air Transport took over the San Francisco to Chicago airmail route (CAM 18 – Contact Air Mail Route 18) for the U.S. Post Office. Under the terms of this agreement, Boeing assumed the responsibility not only to deliver the airmail, but to run the Iowa City airport as well, which meant both maintaining and improving the airport facility.

Secondly, July 1, 1927 marked the date of the first commercial passenger flight into Iowa City. The event was covered “from inside the plane” by Jane Eads – a 20-year old reporter, and the sole passenger, from The Cook County (Chicago) Herald newspaper. The flight from Maywood, Illinois – Iowa’s first commercial airline passenger flight – was on a single-engine Boeing mail and passenger biplane. The trip was uneventful – although Eads confessed later that during the landing in Iowa City, she actually thought the plane was crashing!

The plane that flew in and out of Iowa City on July 1, 1927 was piloted by Ira O. Biffle of Lincoln, Nebraska. Ira Biffle flew for different organizations, including the Nebraska Aircraft Corporation in Lincoln, Nebraska. While serving as a flying instructor there in April 1922, “Biff” taught the first eight lessons in flying to a lanky young man named Charles Lindbergh. In “We,” written by Lindbergh in 1928, he noted that Biffle’s reputation as “the most ‘hard boiled’ instructor the army ever had during World War I” was still well known among the aviation students. Ira Biffle returned to flying for the Air Mail Service on August 6, 1923 and stayed on as a pilot until the service was turned over to commercial companies. In 1930, he was forced to retire as a pilot due to his failing eyesight. Biffle passed away on April 7, 1934 in Chicago at the age of 44 of heart disease, and is buried in Arlington Cemetery in Washington D.C.

In an all-out effort to increase the use of airmail service, on August 1, 1928, the Post Office Department reduced the rate from 10¢ to 5¢ per ounce.

(C-0094) On the 25th Anniversary – Dec.17, 1903 – of Wright Brothers flight – this cover is postmarked in Kitty Hawk, NC – 5 days after the Civil Aeronautics Conference welcomed Orville Wright and Lindbergh. On December 12-15, 1928, some of the most important figures in the new field of aviation gathered to exchange information and honor aeronautical achievements, especially those of the guest of honor, Orville Wright (Wilbur had died in 1912). Following the conference, the delegates even traveled to Kitty Hawk, North Carolina, to attend ceremonies on the site exactly twenty-five years after the Wrights’ historic flight.

(P-0199) Back in the day, the Skyway Cabins were the place to stay. “Strictly Modern – Hot Showers – Kitchens – Automatic Heat – Insulated – Shaded – Quiet” – except for the planes overhead! What more could one ask?

Kudos to the amazing resources below for the many quotes, photographs, etc. used on this page.

Explore The Airport’s Storied Past, IowaCityAirport.org

Click here to go on to the next section…

Click here for a complete INDEX of Our Iowa Heritage stories…